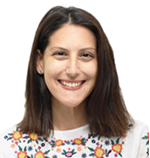 Ioanna Gouseti is currently a Course Tutor in the Department of Sociology at The London School of Economics and Political Science. She convenes criminology and social research methods courses at the undergraduate and postgraduate levels. Her background is in Sociology, Criminology, and Social Research Methodology. Her current research lies at the intersection of criminology and research methodology. She looks at the impact of crime information processing on public attitudes to crime and justice, such as fear of crime, and adopts an integrated methodological approach to the empirical exploration of these topics. Her wider research interests include risk perception, public criminology, sexual harassment, cultural criminology, gender, and crime.

Dr. Aggeliki Kardara has a BA in Greek literature (specialization: Byzantine and Modern Greek), National and Kapodistrian University of Athens, Faculty of Philology. She has an MA in Politics and New Technologies and a PhD in Mass Media and Communication, National and Kapodistrian University of Athens, Department of Mass Media and Communication. She is the author of five books and various scholarly articles related to mass media and criminology.

She is a Research Assistant at the Center for the Study of Crime as well as Research Supervisor in the follow-up research “The argot in the prison community. The inmates’ argot in Greece”. In April 2019 she collaborated with Social Dynamo, Bodossaki Foundation, in the framework of a three-hour seminar entitled “Stigmatizing Language, Beneficiaries and Human Rights”.

Dr. Aggeliki Kardara has extensive research experience in the field of mass media and criminology. In 2014 she collaborated with the National and Kapodistrian University of Athens as the creator of the following educational programs (e-learning): “Media and Criminality” and “Crime and Judicial Report”. She served as a Lecturer at the College of Professional Journalism (CPJ Athens)/University of Wolverhampton in both the BA (Hons) Broadcast Journalism and the M.A. program of Contemporary Media(2015-16) and as a tutor of criminology courses in the University of Athens, Department of Mass and Communication, assigned by Pr. Giannis Panousis, Professor of Criminology (2013-2016). The lessons she taught at the College of Professional Journalism were the following: Digital Journalism, Media Production, Ethical Journalism, Codes of Conduct, and Research Methods. Also, she used to supervise students’ dissertations in the MA and she was responsible for students’ projects in the BA.

She is the founder and principal instructor of a Foreign Languages Institute in Amarousion/Athens, where she teaches English, Spanish and French. She writes articles on the Greek website www.postmodern.gr in her two columns “Crime and Media” & “Education”.

Her personal blog is: http://aggelikikardara.wordpress.com 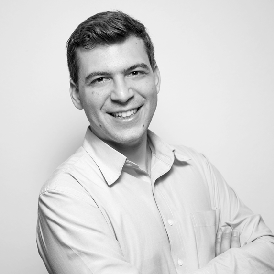 Manos Technitis is a lawyer and Ph.D. in Law cand. in Democritus University of Thrace. He holds a MSc Degree in Criminal Law & Criminology from Democritus University of Thrace, as long as LL.M. in Transnational and European Commercial Law & ADR from International Hellenic University and he is also a certified Data Protection Officer. Since 2017 he is editor in chief at the “Crime Times” scientific journal of Center for the Study of Crime and he is also a member of the editorial committee of the Dodedacenese Jurisprudence Review magazine. He has also served as a member of the Criminal and Criminological Studies Laboratory of the University of Athens, as a member of Criminological Sciences Laboratory of the Democritus University of Thrace Law School, and member of the Political Committee of the Greek Department of Amnesty International. At the same time, he is an active member of many scientific committees of the Rhodes Bar Association. He has participated in many scientific conferences in Greece, Cyprus, and abroad and his papers have been published in scientific books and journals.

Eri Ioannidou is a licensed Forensic Psychologist with a degree in Psychology from the University of Crete and a MSc in Forensic Psychology from Maastricht University in the Netherlands. She is also a personal coach having a Diploma in Life coaching from Athens Coaching Institute. She is running a private practice where she works –among other issues- on cases in which a Forensic psychologist is needed, provides personal support as a coach, teaches the course of Forensic Psychology at the Hellenic American University, is a scientific associate at the Centre for the Study of Crime, conducts seminars and writes articles on topics related to her field of expertise. She has worked –indicatively- at the Cyber Crime Division of the Hellenic Police, at “Epanodos” (the Greek Official Center for the Resettlement of Ex-prisoners which is under the supervision of the Ministry of Justice) and is collaborating on several projects with CESC, Centre for the Study of Crime.

Academically, she has conducted research on stress and burnout of correctional officers, attitudes, and perceptions of people towards corruption, the knowledge, attitudes, and perceptions of Greek Psychology students towards psychopathy, she has contributed to the creation of the first Hellenic Criminology dictionary and she is now interested in mental resilience of “front-line” officers and employees. She is actively present and takes part in conferences, seminars, and professional associations and has given a Tedx talk on myths and truths about psychopathy. 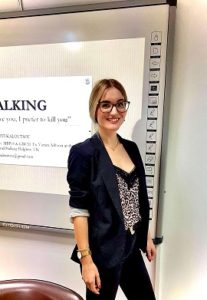 Evi Kaloutsou has graduated from the Department of Philosophy, Education & Psychology with a specialization in Psychology from the University of Ioannina in Greece. She continued her studies at Coventry University (United Kingdom) and she graduated with a 1:1 BSc in Psychology and a Merit MSc in Forensic Psychology. Currently, she works as a forensic psychologist, conducts seminars and workshops on topics related to her specialization, cooperates with the Center for the Study of Crime and she is being trained in Cognitive-Behavioural Psychotherapy (CBT) at the Centre of Applied Psychotherapy and Counselling in Athens. She is also a recognized member of the British psychological Society (BPS).

She has worked as victim advisor at the National Stalking Helpline and as an eyewitness advisor at the Witness Service of the Citizens Advice in the UK. Moreover, she has also worked as a psychologist at a Tomatis centre of diagnosis and intervention for children and at “AKTIOS, ALZHEIMER’S UNIT”.

As a researcher, she has conducted her study at the Psychiatric Hospital of Attica Dromokaitio, where she examined the function of short-term memory in schizophrenic patients based on the existed brain atrophy and the medication taken. Moreover, she has examined the jurors’ attitudes and the perception in child sexual abuse cases and the eyewitness memory. She has been trained and specialized in the assessment and the management of victims and the preparation and the testimony of eyewitnesses. She has 3 publications in Q1 journals and an active presence and participation in conferences, workshops, and professional associations.